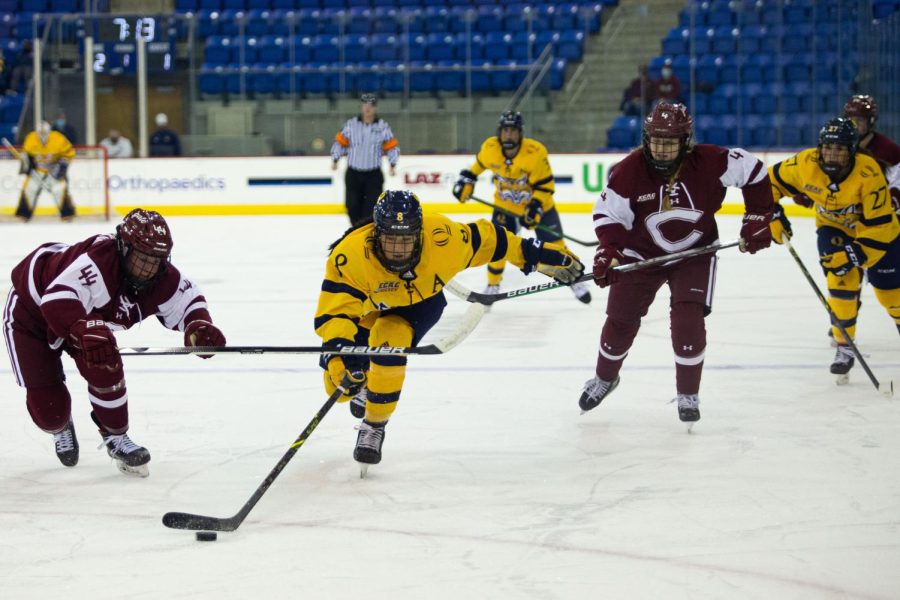 No. 7 Quinnipiac fell to the visiting Colgate Raiders on a snowy Friday night.

While there was no lack of scoring in Friday evening’s game against No. 9 Colgate, the Bobcats found themselves adding a tally in the loss column by a final of 4-3.

As soon as the puck dropped, both teams came out shooting. The Raiders asserted early dominance, with junior forward Danielle Serdachny silencing the home fans by netting her 16th goal of the season just over two minutes into the period.

After the team had several drives into the offensive zone come up empty, Bobcats sophomore forward Nina Steigauf fired a rocket from the face-off circle up over the left shoulder of sophomore goaltender Kayle Osborne for her team-leading 12th goal of the season, and the score was back even.

“It’s all about the little details. All it takes is one shot to tie the game,” Steigauf said.

Riding the momentum from Steigauf’s goal sophomore defender Kendall Cooper got in on the action. After Osborne couldn’t cover up a shot from senior forward Lexie Adzija, Cooper grabbed the puck and stuffed it just past Osborne’s right pad, putting the Bobcats up 2-1.

After Cooper’s goal, the Raiders fell back and relied heavily on dump-and-chase offense. For the rest of the period, the teams traded possessions. It didn’t matter what Colgate did, after allowing that first goal, graduate student goaltender Corinne Schroeder was a wall not letting anything past her, stopping the next 23 Raider shots.

Entering the second period, the Raiders once again were having to dump the puck as the Bobcats forced them to the outside.

Just over five minutes into the period, Raiders junior defender Maggie MacEachern had a one-timer in the slot blocked by senior defender Zoe Boyd. The Bobcats did an excellent job of clogging the lanes and blocking shots all game, finishing with 18 compared to the Raiders’ eight.

Just when the period seemed to have started stalling Raiders freshman forward Neena Brick intercepted a pass right in front of Schroeder and backhanded a shot off the right pipe, netting her sixth goal of the season and evening the score at 2-2.

Moving into the third period and less than a minute in, the Raiders had an early opportunity to capitalize on the power play as Bobcats redshirt junior defender Courtney Vorster was given a minor penalty for hooking, but they weren’t able to take advantage. Neither teams’ power-play units were effective as they went a combined 0-6.

Like boxers trading blows, the teams continued to trade possessions as it became a question of which goalie was going to falter. Just past the halfway mark of the period, Raiders sophomore forward Kaitlyn O’Donohoe snuck a shot past Schroeder’s left blocker, putting the Raiders on top 3-2.

Luckily for Schroeder, the offense had her back as a mere 20 seconds later junior forward Sadie Peart snuck a backdoor pass onto the stick of fellow junior forward Jessica Schryver, who snuck it under the glove of Osborne to make it three-all.

“The character, commitment and the fight to keep battling back was really impressive and showed a lot of mental toughness today,” Bobcats head coach Cass Turner said. “It’s an important step for this team.”

After letting in a goal both defenses tightened up, not wanting to make any more costly mistakes. This was a contest that required overtime.

Raiders junior defender Allyson Simpson only needed 38 seconds to sneak the puck right through the five hole of Schroeder, sealing the win for the Raiders. The win gave the Raiders their 10th road win of the season.

Even in a loss, the best teams can find positives.

“I feel like we haven’t battled this hard in a game yet this season, so even though we lost this game we got a lot out of it,” Schryver said.

The Bobcats will be back in action on Sunday, Jan. 30, at home vs. Cornell. The Bobcats then go on a five-game road trip before finishing the regular season on Saturday, Feb. 19, at home vs. Brown.