The research report “Anaesthesia Machines Market: Global Industry Analysis (2012-2016) and Opportunity Assessment (2017-2027)” published by Future Market Insights throws light on several aspects driving the global market. The growth of the market is impacted by various trends, developments, drivers and challenges, the analysis of which is included in the fact based research report. The exhaustive research publication covers historical data analysis along with current scenario as well as future projections of the market from a value standpoint for a 10 year period, starting from 2017 till 2027. The analysis on various segments playing a major role in the expansion of the global anaesthesia market has been carried out to get a complete picture of the global market.

Mergers and collaborations between local and international players in developing regions are expected to present potential opportunities for growth in terms of successful market penetration and sales. The regional markets of Asia Pacific, Latin America and GCC countries is anticipated to create significant opportunities for players involved in anaesthesia machines market. This can be attributed to the increasing surgical procedures in these regions coupled with increasing per capita expenditure on cosmetic surgeries and other healthcare associated procedures. Players in this market are establishing business relationships with healthcare facilities in these regions as well as government agencies for long term gains and enhancing their presence in the region. Moreover, partnership programs between organizations and institutions are observed to facilitate anaesthesia training programs.

In the end user category, the hospital segment is the most lucrative from sales point of view. This segment led the global market in 2017 and is expected to continue with its dominating streak in the coming years. This fact is backed up with data presented in this research report, which portrays a high growth potential of this segment by the end of the assessment period.

The hospital segment stood at a value a bit under US$ 740 Mn in 2017 and is estimated to reach a valuation high than US$ 1 Bn by the end of the year of assessment. It is projected to expand at the highest rate compared to other end user segments during the forecast period. 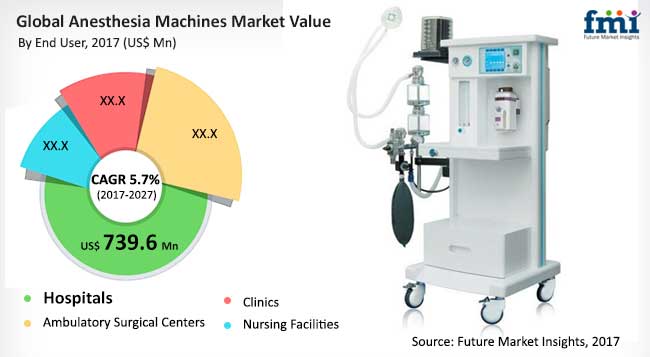 According to WHO (World Health Organization) and World Bank, by 2026, the treatments demanding surgeries and hence anaesthesia machines would eclipse that of tuberculosis and HIV as well as malaria. Current market scenario portrays the fact that about 30% of the population in the entire globe do not have access to surgeries. On the contrary, about 75% of major procedures are being performed in the wealthiest countries in the world whereas poor countries are witnessing only 3.5% of operations. Government bodies along with non-government institutions are constantly working on offering healthcare access to every region, which is expected to trigger the adoption of anaesthesia machines. The growing number of surgeries and increasing government support are expected to fuel the growth of the anaesthesia machines market at a global level in the years to follow.

However, product recalls due to defects in devices, a shortage of healthcare professionals, adoption of refurbished machines, lack of public access to healthcare facilities and lack of clinical resources are expected to pose hindrances to the growth of the global market.