Australia‘s fourth-quarter inflation rate crossed the wires at 3.5% this morning, beating the 3.2% consensus forecast, according to a Bloomberg survey. The hotter-than-expected inflation print will likely serve as a tailwind for the Australian Dollar. That is because the Reserve Bank of Australia (RBA) may react in a hawkish manner given that the current rate is above the central bank’s 2 to 3% target range. AUD/USD was slightly higher on the day following the CPI print.

The market has increased bets that the RBA will tighten in recent months, pulling the chance for a rate hike into this year. Today’s CPI numbers may provide the necessary ammunition for the RBA to end its bond-buying program at the next policy meeting in February. The hot inflation follows a robust employment report that dropped last week. The question for traders is, RBA Chief Philip Lowe will continue to push back on the market’s aggressive outlook over rate hikes, or will he begin to capitulate slightly amid the increased inflationary pressure.

Asia-Pacific markets are off to a sharp index losses after Wall Street trimmed deep late in the session overnight, with the embattled Nasdaq 100 gaining for its first day since January 14, reversing a more than 2% intraday loss. Still, a sense of risk aversion is lingering in markets, and the safe-haven US Dollar gained overnight, which pressured the risk-sensitive Australian Dollar. The Monetary Authority of Singapore (MAS) unexpectedly tightened policy this morning, with the central bank citing inflationary risks.

Markets will likely remain on a cautious footing given the event risks ahead for the week and the forthcoming Ukraine situation. The Federal Reserve’s policy decision will cross the wires later this week when it is expected to announce further details on how quickly the balance sheet will be reduced. Its asset purchases are expected to cease by March, when rates are also expected to lift off. The balance sheet has more than doubled since the start of the pandemic.

New Zealand will report fourth-quarter inflation data later this week. The Kiwi economy has experienced more substantial inflation than its cross-Tasman neighbor Australia, which helps explain the relatively hawkish policy seen from the Reserve Bank of New Zealand. Analysts expect the print to cross the wires at 3.2% year-over-year, up from 3.0% in Q3. A hotter-than-expected print may boost NZD.

AUD/USD is back at a familiar level of conflict around the 0.7160 level, which has served as both support and resistance going back to September. A break above this area would put the 100-day Simple Moving Average (SMA) for a test, a level bulls had trouble with earlier this month. Alternatively, the 23.6% Fibonacci retracement appears to be a likely level of support after an intraday move lower failed to breach the Fib. 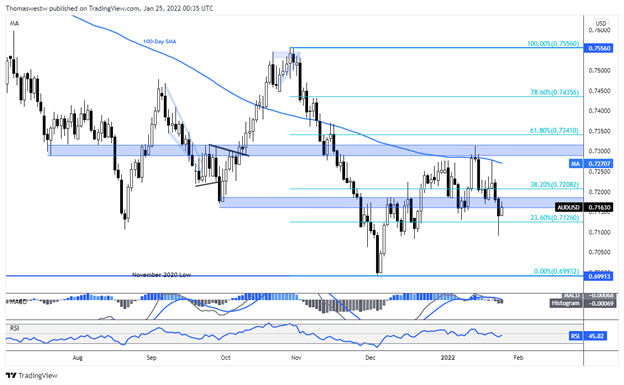