Credit Suisse has warned that its investment bank will report a loss for the fourth quarter as trading revenues slowed, marking the latest blow to the Swiss lender reeling from the exit of António Horta-Osório this month.

The final quarter of 2021 saw a slowdown in revenues at its investment bank that partly reflected “a reversion to more normal trading conditions”, Credit Suisse said on Tuesday.

Alongside the decline, the bank also said it would take a SFr500m ($545m) provision in the fourth quarter to cover litigation settlements, mostly tied to its investment banking business.

The warning capped a grim 12 months for Switzerland’s second-biggest bank, which was punctuated by the closure of $10bn of funds linked to Greensill Capital, a record trading loss following the collapse of family office Archegos Capital and the departure of chair Horta-Osório over coronavirus quarantine breaches.

Credit Suisse shares have fallen more than 10 per cent since Horta Osório’s resignation last week, and are down almost 40 per cent since March. The shares were 1 per cent lower on Tuesday.

The record trading loss stemming from the collapse of Archegos prompted the bank to exit prime broking and scale back the amount of risk it was taking. Credit Suisse said that the strategy reset hit profits at the investment bank in the quarter. 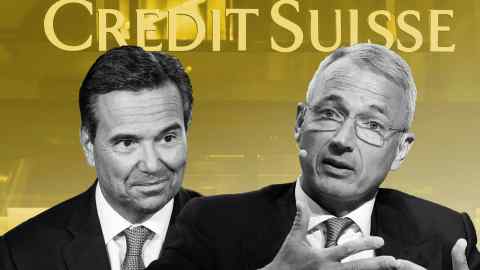 “Despite removing staff and customer uncertainty with the new group strategy in November, it is clear that near-term momentum remains very poor, and ambitions to grow the top-line still seem a distant prospect,” said Andrew Coombs, an analyst at Citigroup . “We expect these results will again bring into question management leadership.”

Credit Suisse did not provide details of the litigation behind the provision, but they do not relate to the defunct Greensill supply chain finance funds, where a spate of lawsuits involving investors and SoftBank is expected to take years to resolve.

The hit from the provision will be partly offset by gains of SFr225m from real estate sales, the bank added.

Its struggles in the final quarter were not confined to its investment bank. Credit Suisse’s wealth management division, which is racing to catch up with Swiss rival UBS, experienced a “significant slowdown in transaction activity” in the Asia-Pacific region, it said.

“We expect this result will be far worse than peers and it calls into question the new strategy which is to allocate more capital to wealth management and grow this business,” Coombs said.

The bank had previously announced it would take a SFr1.6bn goodwill impairment in the quarter. Before that, the bank as a whole was expected to break even for the period.

Video: Greensill: a tale of hubris, hype and greed