Genital herpes is a common sexually transmitted disease. With the increase in population in various regions, there is also an increase in the rate of health problems around the world. With the growth of the disease rate, the treatment markets are also expected to grow exponentially.

With regard to sexually transmitted diseases such as genital herpes, the treatment market includes different types of drugs such as acyclovir, valacyclovir, and famciclovir. Indications for genital herpes include HSV-1 and HSV-2.

Market growth is primarily driven by increased government spending on the healthcare industry. Many countries are focusing on the prevention of infectious diseases which in turn has a positive impact on the herpes drug market resulting in high demand from local governments and third party payers.

The rising incidence of genital herpes in countries in Asia such as China and India will lead to more growth opportunities in the market. The growth trend will continue in response to increased healthcare spending in emerging economies.

The development of a genital herpes vaccine is on the table because pharmaceutical market leaders are focused on developing new drugs and are also collaborating with research institutes for faster clinical trials and product development.

For example, Sanofi Pasteur, in collaboration with the National Institute of Allergy and Infectious Diseases, is currently developing a herpes vaccine called HSV529 (HSV15). The vaccine is classified as a replication defective virus which means that the virus possesses all components of HSV except for two important proteins UL5 and UL29, which are involved in viral DNA replication.

In March 2021, GlaxoSmithKline plc began a phase I human clinical trial of an experimental HSV-2 vaccine to study the interaction, safety, and immunogenicity of four different levels of the vaccine in healthy participants aged 18-40 years.

Rapid advances in the field of virology and increased investment towards modern medicine and development of curative therapy will boost the growth of the genital herpes treatment market globally over the next decade. 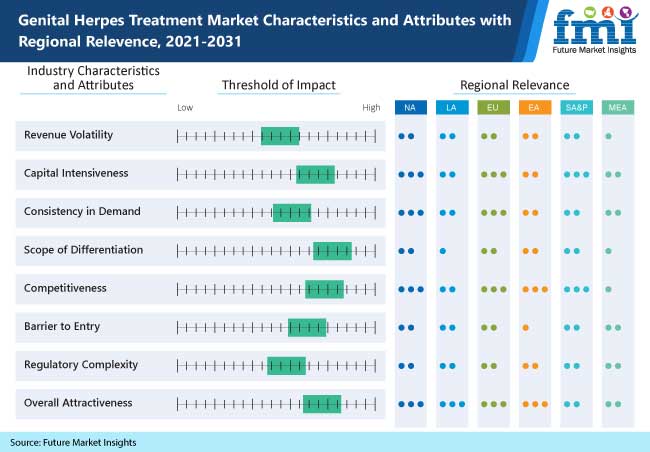 According to the World Health Organization, in 2016, about 67% of the world’s population (3.7 billion) under the age of 50 had HSV-1 infection. This represents a significant growth of the global HSV treatment market during the forecast period. Similarly, about 13% of the world’s population (491 million people) under the age of 50 live with HSV-2 infection as of 2016.

Companies are also trying to offer cost-effective treatment methods. The new vaccines provide complete protection against a variety of HSV1 and HSV2 strains. Companies are increasing research and development activities for the treatment and prevention of genital herpes. Most companies focus on approval and release of generic drugs in underdeveloped countries to provide low-cost drugs for the treatment of genital herpes.

The Middle East and Africa region is expected to become the most lucrative region in the industry. With the increase in sexually transmitted diseases in the region, the demand for genital herpes treatment is also expected to rise.

Among the various distribution channels, retail pharmacies have the largest volume in the market, but this segment is lagging behind in terms of growth rate. With the growth of online marketing and e-commerce, online pharmacies are the fastest growing segment which is expected to register a growth rate of 5.4% during the forecast period.