Now that the Super Bowl is approaching, NFL trade rumors will be the name of the game around the league. The new league year is slated to start in March. But as we’ve seen in the past, trades are reported long before.

Remember, Matthew Stafford was dealt from the Detroit Lions to the Los Angeles Rams on January 30 of last year. We’re going to hear about some trades ahead of March.

Below, we provide you with the latest NFL trade rumors during what promises to be a busy offseason in that regard. Bookmark. Save. Do your thing. This will be updated consistently over the next several months.

Related: Everything you need to know about the NFL calendar

Aaron Rodgers situation remains up in the air

Following their ugly home loss to the San Francisco 49ers in the NFC Divisional Playoffs, there’s now an open question whether Aaron Rodgers will return to the Packers for a 17th season. Remember, he was the subject of trade rumors last offseason and has refused to commit to the Packers for next season.

“Everything is definitely on the table. There are things that seem more plausible or more likely, which I won’t necessarily get into. The most important thing is, first, the commitment to playing and to go into the offseason and training and all that’s stuff,” Rodgers said recently. “And then after that it’s conversations with my agent and (Packers general manager) Brian (Gutekunst) and then looking at the desires of the team and kind of the mindset moving forward, and then make a decision from there.”

The Denver Broncos’ decision to hire former offensive Packers offensive coordinator Nathaniel Hackett led to even more rumors that Rodgers could be headed to Mile High City. Either way, this will be the major storyline over the next several weeks. For his part, Rodgers did indicate he’d like to make a decision on his future by mid-February.

NFL trade rumors: Christian McCaffrey could be on the move

It was back in April of 2020 that the Panthers signed McCaffrey to a record-breaking four-year, $64 million extension. This came after the former Heisman finalist put up one of the best two-year runs for a running back in NFL history.

Nearly two years removed from that extension, and McCaffrey is now seen as somewhat of an enigma. He’s played in just 10 games over the past two seasons due to numerous injuries. It’s led to speculation that the former first-round pick will be traded during the offseason. Whether any team shows interest in the dynamic back remains to be seen.

This former 1,000-yard receiver stepped away from Atlanta five games into the 2021 season to focus on his mental health. Since then, we have not heard a whole lot on this front outside of the fact that the Falcons will look to move off the former first-round pick this offseason.

“They are still holding out hope that they will have Calvin Ridley for this upcoming season. That said, the facts are it doesn’t sound like there has been a ton of communication between Ridley’s camp and the team, according to sources that I have spoken to…I do believe that a fresh start could be in the cards, maybe the best thing for Ridley.”

Ridley, 27, had a breakout performance in 2020 for Atlanta. The former Alabama star caught 90 passes for 1,374 yards and nine touchdowns while hauling in 63% of his targets from Matt Ryan. He’s set to count $11.1 million against the cap in 2022 and will be entering free agency the following March. 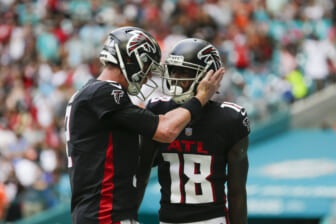 It’s now evident that San Francisco will turn to Trey Lance for the 2022 season following the team’s brutal fourth-quarter performance in the NFC Championship Game against the Los Angeles Rams. This is one of those trades that could happen long before the new league year opens in March.

Despite Garoppolo’s lackluster stats and struggles in the playoffs, there’s a number of teams who would view him as an upgrade right now. According to oddsmakers, the Pittsburgh Steelers and Washington Football Team are favored to land Garoppolo in a trade. As for potential compensation, a second-round pick and change could be in the cards.

Look for something to happen here within the next few weeks, similar to when San Francisco traded Alex Smith to the Kansas City Chiefs mere weeks after their Super Bowl XLVII loss to the Baltimore Ravens in 2013.

Three-time Pro Bowl quarterback Deshaun Watson sat out the entire 2021 season after requesting a trade around this time last year. Said trade request coupled with claims from north of 20 women of sexual misconduct kept him off the field. With civil pending cases and the outcome of a grand jury inquiry expected soon, there’s a good chance Waston’s off-season situation will be settled.

If so, Houston would like to trade Watson some time in March. This would give the team time to figure out what to do with the remainder of the offseason. As for potential trade destinations, the Carolina Panthers continue to show interest in the stud young quarterback. However, the off-field situation will end up being the biggest story ahead of a potential trade.