, , and futures were all deeply in the red on Tuesday as markets were rattled by geopolitical tensions as well as tomorrow’s Federal Reserve interest rate.

The dollar recovered along with Treasury yields.

Traders were on high alert because of news that NATO is sending reinforcements to eastern Europe and the US has put its own troops on standby in the event that Russia invades Ukraine.

Investors are also expecting money to become more expensive as the Fed is anticipated to start tightening policy imminently. 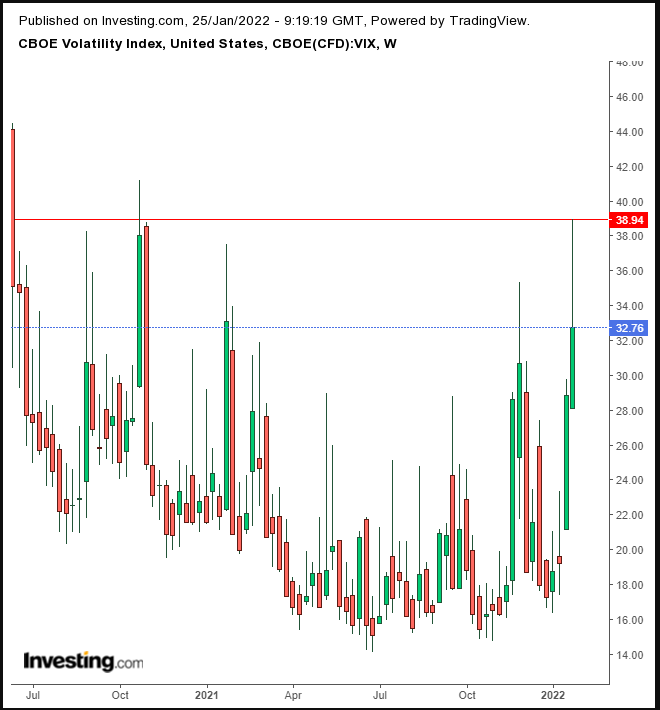 In Europe, the found its footing after its worst plunge since June 2020. Strong earnings for telecom equipment manufacturer (BS:) and luxury watchmaker Swatch Group (SIX:) helped the pan-European gauge rebound. 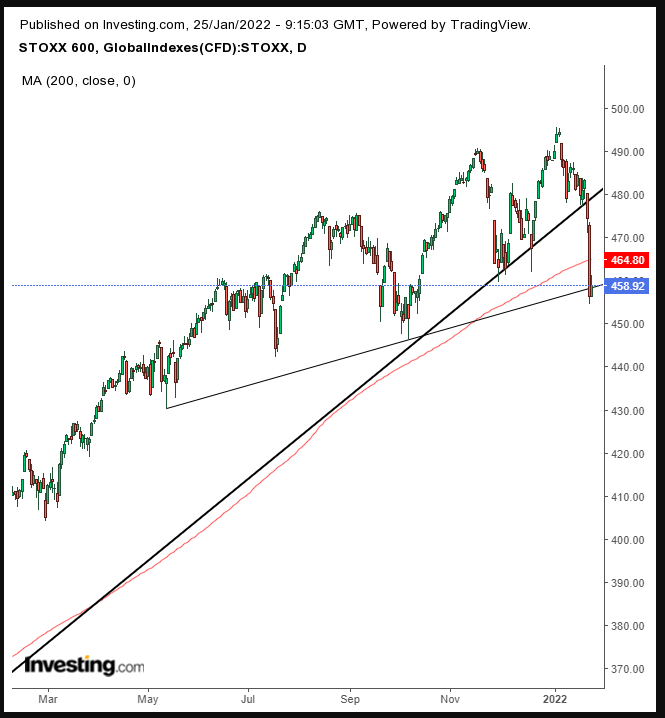 After the European benchmark fell through its uptrend since the March 2020 bottom, it is now struggling with remaining above a flatter uptrend line since May 13. Since closing below the 200 DMA yesterday, for the first time since crossing it on November 2020, the odds increase for a continued selloff.

The steep selloffs came even after earlier, positive from the Bank of Korea showed that Asia’s fourth-largest economy grew at the fastest clip in 11 years, thanks for a surge in exports and construction activity. 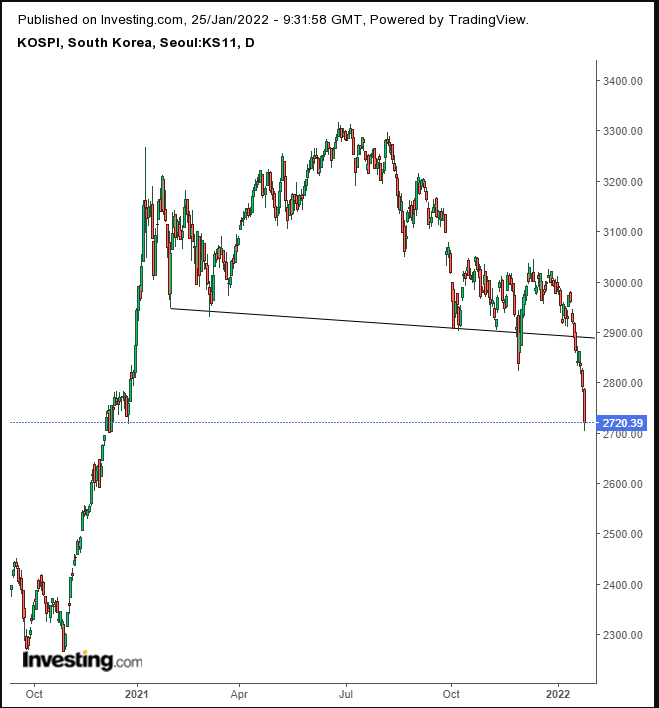 The benchmark extended the downside breakout of an H&S top.

The fell 2.85% in the early part of Monday’s session but closed 2.12% higher. So it seems both sides of the reflation trade outperformed with the clear advantage to cyclicals.

It appears the outlook for higher rates has shifted from dangerous to no big deal for stocks. BlackRock Investment Institute said that higher interest rates pose a minor threat to equities and that opportunities remain even if Treasury yields continue rising.

Yields on the Treasury note are up for the third day in a congested range. 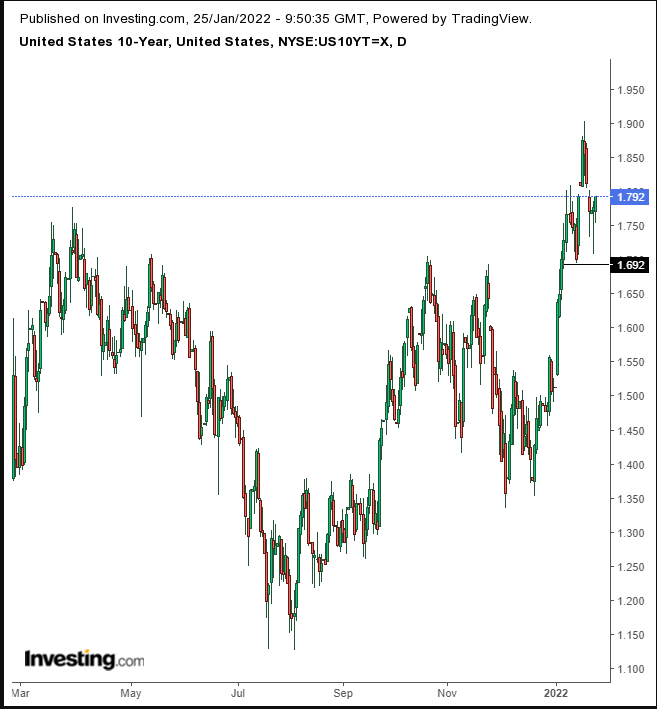 Rates have struggled to let go of the March peak and maybe form a small H&S top.

The rose for the second day, tracking yields. 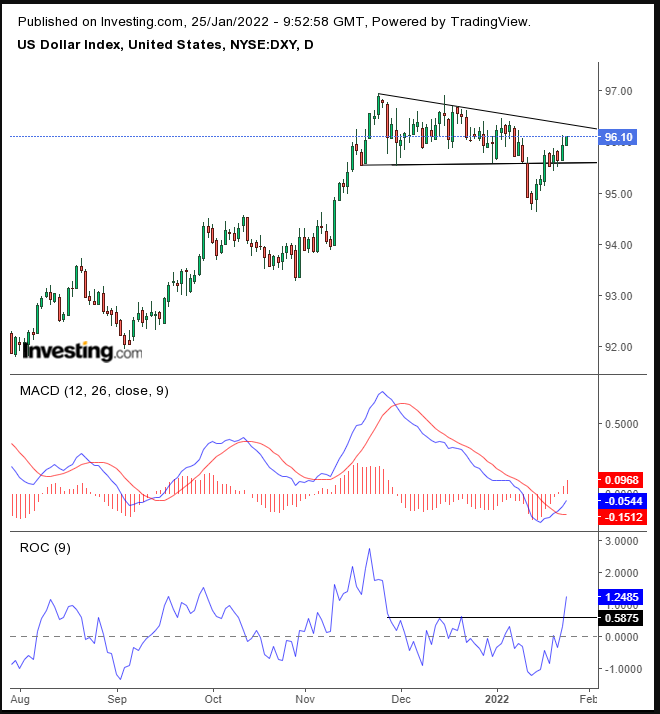 The greenback climbed back into a Descending Triangle as bulls attempted to blow out the bearish pattern. The MACD and ROC both provided bullish signals.

retreated from yesterday’s advance as it continued to range.

was little changed. There has been no obvious trend for the last four days. 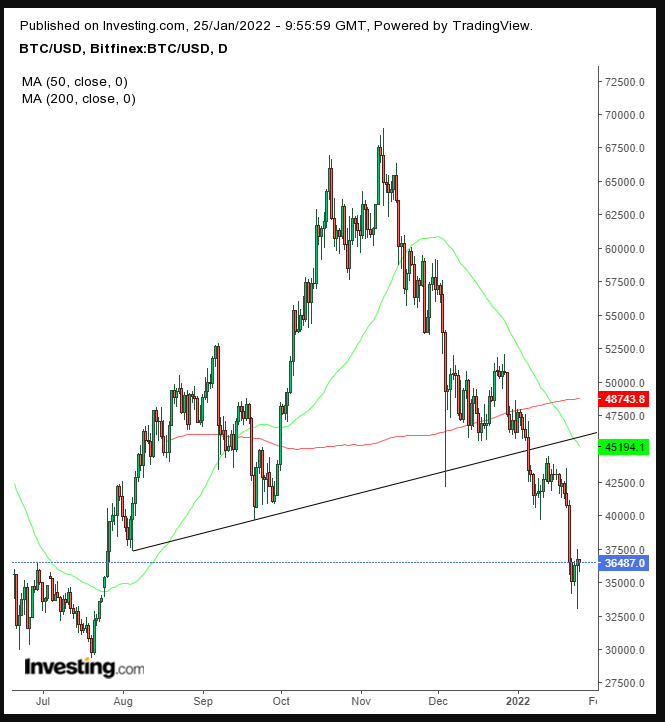 Recently, the cryptocurrency triggered a Death Cross after the 50 DMA crossed below the 200 DMA, one of technical analysis’s most notorious bearish signals, right after Bitcoin completed a sizeable H&S top, which could mean considerable for the crypto.

Found its footing after a volatile period amid disruptions to global supply as well as its demand outlook being caught in the crosshairs of the broader market risk-off sentiment. 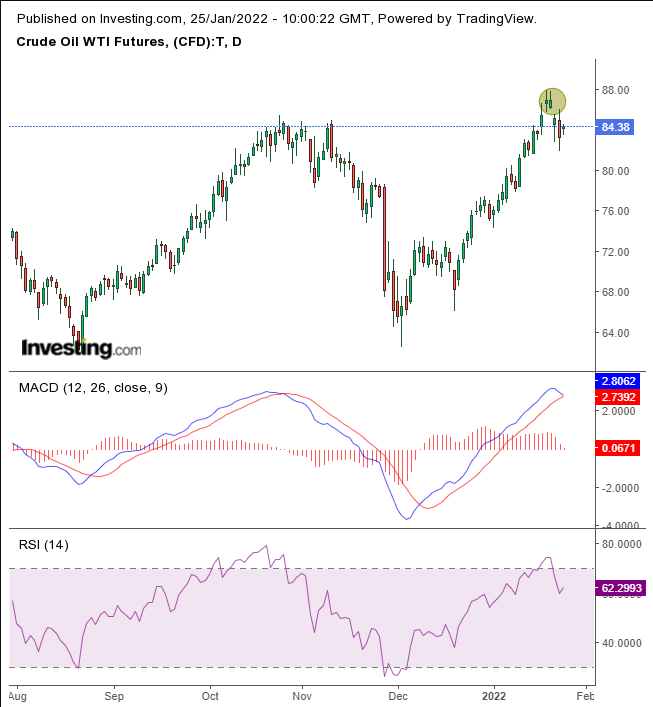 The price was struggling with direction at the resistance of the October-November peak after WTI formed an Island Reversal when the price first gapped up, but then gave up the advance with an equally dramatic gap down. The RSI was curving down from overbought conditions and the MACD looked about to trigger a bearish cross.