Psychology mainly refers to the mental or behavioral characteristics of an individual or group. Stock market psychology refers to the ability to identify and manage the emotions and behaviors that may arise during trading.

As is also evident, the price of the stock mainly depends on the demand for the stock in the market. There are skills required to trade and invest successfully in the markets which include evaluating the fundamentals of the company, studying trends, waiting for the right time, developing and following your strategies and being disciplined. Apart from this, what is also important and plays a major role in increasing one’s success rate is how one behaves after entering or exiting a particular trade/investment. You can follow technical and fundamentals metrics, but having your feelings in place is also an important metric for being in the market for longer.

Psychology is a big part of investing in the stock market, and if well understood, it can help prevent financial setbacks.

A good trader is someone who knows when to exit and lock in profits or losses rationally and has a pragmatic rather than emotional approach. “Hoping” that a particular stock will move a certain way once you enter the trade isn’t really going to work unless you have luck with your favour. Get into the game with a strong mental ability to accept if the outcome is against you and walk away when you know it’s time. Stick to your trading plan.

Humans sometimes do not control their emotions, someone who understands this well may use it against those who do not and end up winning the market or cutting losses. A person’s mindset is just as important as other traits and systems of trading.

Emotions such as greed and fear often lead to irrational investment decisions. However, crowd psychology also contributes to huge stock price movement but with many entering without any valuations of their own.

Perhaps the fear of missing out is a new trend that leads many to enter and exit trades without a solid research because that is what the majority of them seem to be doing. This somewhere is also related to the herd mentality which does not really help the individual in the long run because it creates dependency and makes the person reluctant to develop their own trading system and strategies. Emotions like greed, fear, jealousy, excitement, etc. drive fear in the individual causing him to act upon it. 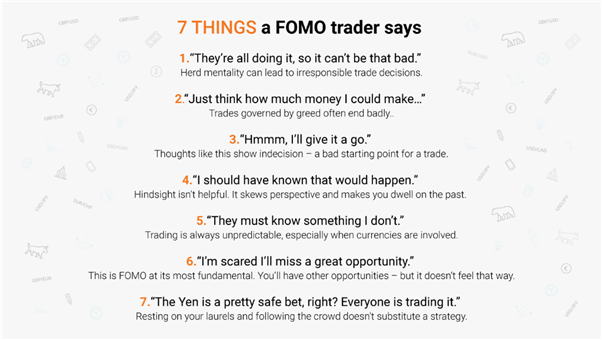 In the current scenario, as millennials enter the markets, FOMO turns out to be a major reason for many to enter the trade.

Here I am not against a FOMO trader, however, I believe one should have a proper background on his/her trades and be a disciplined trader to have a long term view rather than letting his/her emotions control his/her trades. This is how winners define their mindset and stand out. 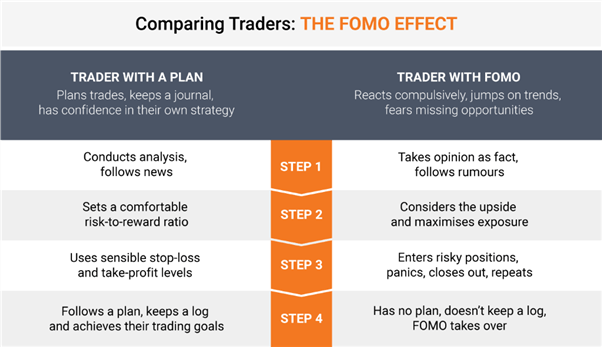 Finally, as Victor Sperandeo rightly said, “The key to successful trading is emotional discipline. If intelligence is the key, there will be a lot of people making money from trading.“